There are many possible cycle tours in Vietnam, ranging from very tough and challenging rides in the northern uplands, to more gentle meanders along the Mekong Delta.


Vietnam is rapidly becoming one of the most popular countries in the world for adventurous bike touring. It’s easy to see why. This long, slender land with such an unhappy history has an amazing array of landscapes, with thousands of km of roads linking mountains and beaches, jungle with intensive paddy field landscapes. Vietnam represents a viscerally intense cycling and cultural experience, love it or hate it, you will not forget your trip.

In Vietnam, the classic biking route for cyclists is Highway 1, the main road linking Hanoi in the north to Ho Chi Minh City in the south. The most popular section of Hwy 1 is from the historic capital of Hue south to Nha Trang and other tourist resorts to the south. For the fitter and more adventurous cyclist, the central and northern highlands are very worthwhile challenges.

Roads in Vietnam can be rough in sections, and more minor roads are often dirt tracks. However, for most of the main routes, the surface is good enough for almost any type of bike, except perhaps for the lightest of road bikes. Even the paved roads can be a bit muddy, don’t forget your mudguards. Bike repair shops are around in nearly every town, but they often do not have the tools for western bikes. Local bikes are usually poor quality and are not recommended for touring. Bring a basic toolkit or multitool and some spare spokes, along with a cracker/chain whip for repairing drive-side spokes. Regular touring or road tyres are sufficient for most of the country.

The climate changes significantly from north to south. There can be snow in winter in Sapa, at the same time as it is 40°C in Ho Chi Minh City. The coast can be very windy. Rain can be heavy and persistent over most of the country at many times of the year. Only in later winter on the northern highlands would serious wet/cold weather gear normally be required. Elsewhere, a light fleece and wind/waterproof top should be sufficient in addition to your normal kit. There is no major cultural problem with wearing shorts/lycra, but longer trousers/skirts may be more appropriate in more remote areas or visiting temples. T-shirts and casual clothes are widely available, and if you can’t find anything to fit you, there are numerous tailors who will make you anything from shorts to a silk sleeping bag liner to a tuxedo, all in a few hours. Cosmetics and medicines are very widely available, but watch out for counterfeits.

Camping is very difficult in most of Vietnam; there are few suitable places to pitch a tent. Nearly every town will have guesthouses, so tents and sleeping bags are an unnecessary encumbrance. Expect to pay between US$6 to US$20 a night in a typical guesthouse or local hotel. The quality is very variable, and can rarely be judged by outside appearances so always check out a room on offer before accepting it. Food and beer is very cheap and usually of a high quality. The best Vietnamese cooking is superb, always ask locals for recommendations, Vietnamese people are enthusiastic foodies. Vegetarian food is usually available, but sometimes communicating what you want is difficult. Roadside stalls selling typical Vietnamese food and drink are nearly everywhere so it is not necessary to bring cooking equipment or food (apart from snacks). Chlorine or iodine tabs are necessary for drinking tap water in most of the country.

The roads near the major cities are often chaotic, polluted and accidents are frequent. The quality of driving often leaves a lot to be desired. However, many Vietnamese cycles and as a result, drivers are usually quite ‘bike aware’ and leave a reasonable gap between themselves and cyclists. The hard shoulder on major roads is usually considered cyclist’s territory. One of the joys of cycling in the Vietnamese lowlands is riding in the early dawn with crowds of cycling schoolchildren. The usual Asian driving rule that the right of way goes to the biggest vehicle applies. Watch closely local cyclists and copy what they do and you should be quite safe. Remember that most vehicles will toot their horn once to let you know they are coming behind you. A second toot means you are directly in its path. A third toot means hit the paddy field immediately if you want to live!

In general, Vietnam is a safe country to travel in. There is some petty crime but violence against tourists is rare. Both male and female cyclists rarely experience aggression, hassle or danger, but the normal common-sense precautions should be taken, especially after dark in urban areas. Although guesthouse owners will normally report to the local police travellers outside the normal tourist areas, hassle from police/army is unknown, but as a precaution do not be seen taking photographs of anything that looks militarily significant.

The Vietnamese people are very distinct in their culture and in their approach to westerners from other SE Asians. This is unsurprising given the countries history, where in the second half of the 20th Century they had to defeat successive invasions from the Japanese, French, Americans and Chinese at a cost of millions of lives. Tourists often complain of rudeness from locals and frequent rip-offs, but this is mainly a feature of the tourist hotspots. Most bike tourers, who have been to Vietnam, experience generosity and friendship, especially in more remote areas. While the Vietnamese are not as immediately warm and welcoming as, for example, the Thai or Laos, do not confuse a relatively cool reaction with hostility. When you show politeness and respect for their culture, expect this to be reciprocated, but demonstrate rudeness (as many tourists do), then do not expect the Vietnamese to turn the other cheek. Be friendly and open with local people and you will get on fine. If you do face rudeness or attempted rip-offs, be firm and do not lose your cool. You will usually not have to work too hard to find someone with a little English, even in remote areas. Many Vietnamese also have a little French, Russian or Mandarin Chinese. As with most countries, learning a few phrases of the local language goes down well with the locals.

The landscape of the north of Vietnam is characterized by jungle clad weathered karst limestone mountains. Hanoi is located on one of the few plains, it’s a sprawling city full of character, and it’s surprisingly easy to explore by bike once you bite the bullet and join the masses of scooters and bikes. The most popular route for cyclists is to explore the highlands west and north of Hanoi along Highway 6, eventually ending in Sapa, where you can return to Hanoi by train, or turn north into China at the nearby border crossing point. In total it is about 700km, but it can easily be cut short by returning by bus or plane (there are airports near Son La and Dien Bien Phu). There is a string of towns along the route, but there are some large distances between settlements, so be prepared for some long, tough days in the saddle. Good places to stop include the beautiful Lac village near Mai Chau and the pleasant little town of Son La. This route is physically demanding, and should only be tackled by fit and/or experienced cyclists. However, it is highly recommended it as it passes through stunning landscapes in areas rarely seen by tourists.

The classic Vietnam ride. Few cyclists go the whole route from Hanoi to Ho Chi Minh City, most bypassing the relatively dull northern section. But from Hue south the riding is excellent and it gives an amazing kaleidoscope of the best and worst of Vietnam and its people. The road conditions are generally reasonably good, with a few moderately challenging hills. Traffic can be uncomfortably heavy in the vicinity of larger towns and cities such as Danang, but is generally acceptable. There are plenty of guesthouses at reasonable intervals. Good bases for rest, relaxation and exploration include the ancient capital of Hue, the lovely historic town of Hoi An, and the large beach resort of Nha Trang. Most cyclists skip the last 200-km or so to Ho Chi Minh City due to the heavy traffic, but it is cyclable.

The Mekong Delta is for many people the essence of Vietnam. It is as large and as flat as the Netherlands, with a fascinating patchwork of dazzling green fields and palm trees intersected by giant branches of the Mekong. Cycling is easy and there are regular towns and villages, but traffic can be intense close to Ho Chi Minh City and the high population density means you are rarely alone. There are relatively few main roads, but there is a rich network of tracks to explore for the adventurous cyclist. My Tho, Can Tho and Chau Doc are popular stops. Chau Doc is the main gateway to Cambodia.

Find and book  Biking Tours or other  Adventure Tours. 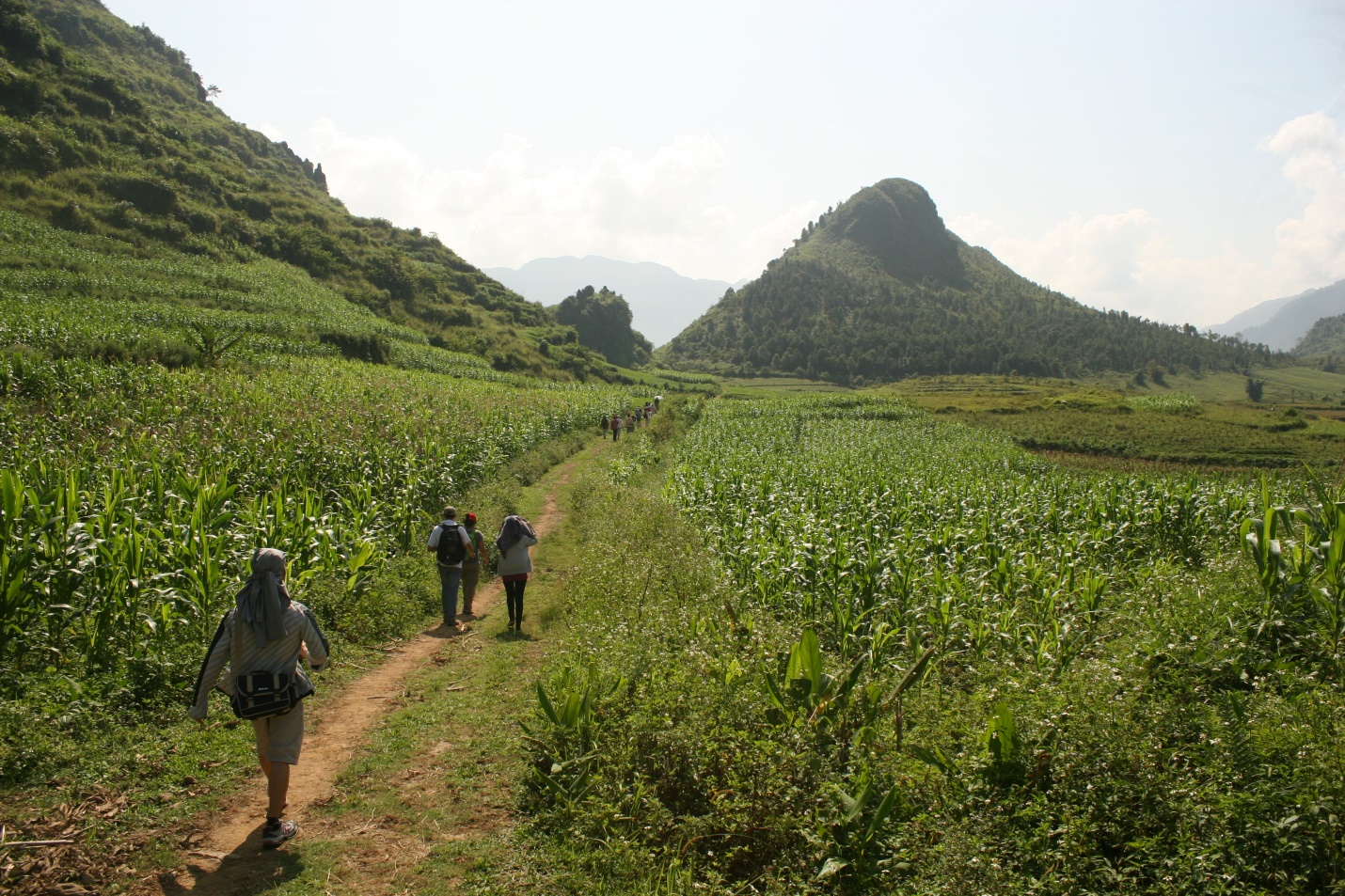 Top 4 reasons why you should take a Vietnam motorcycle tour 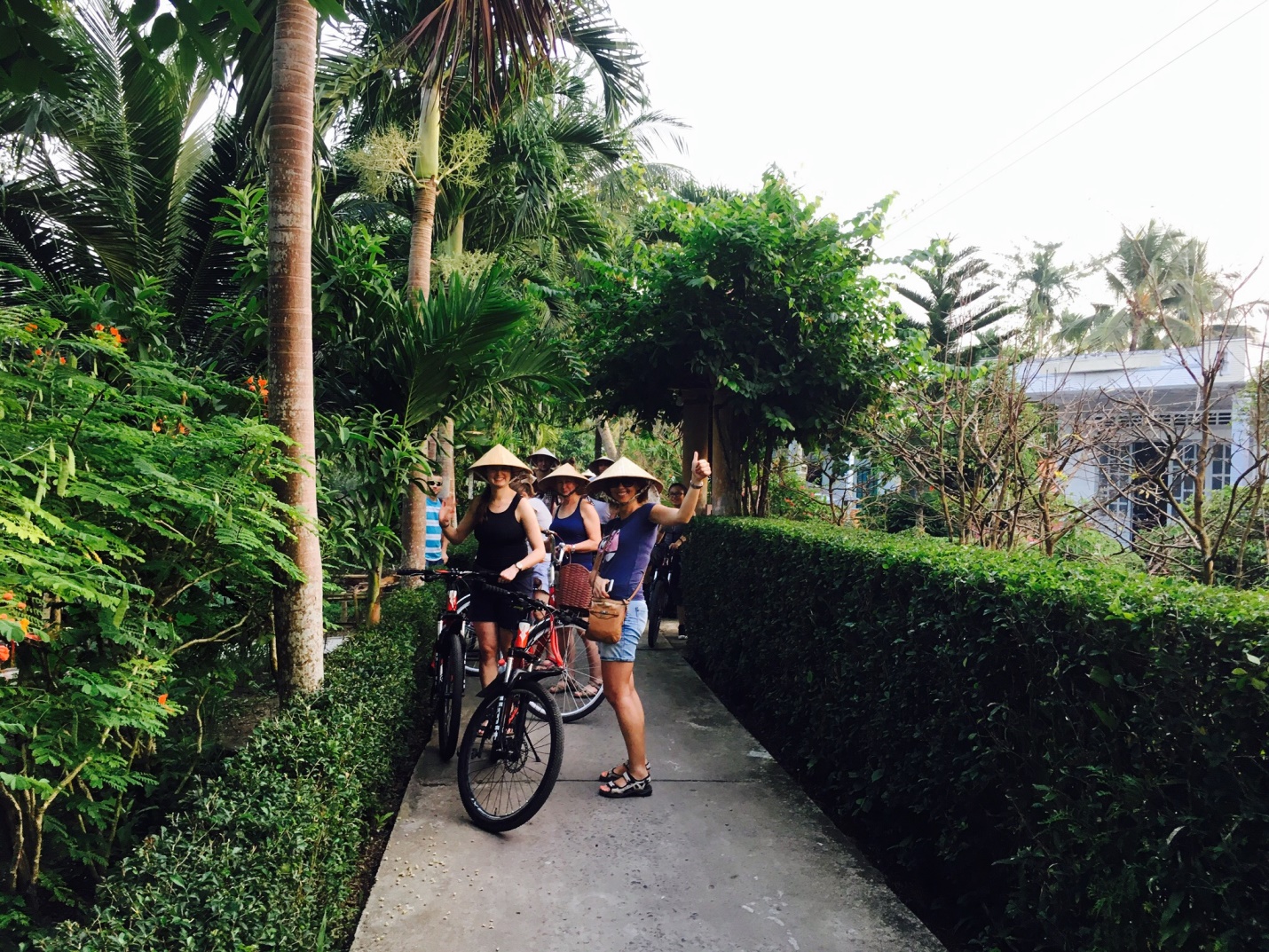 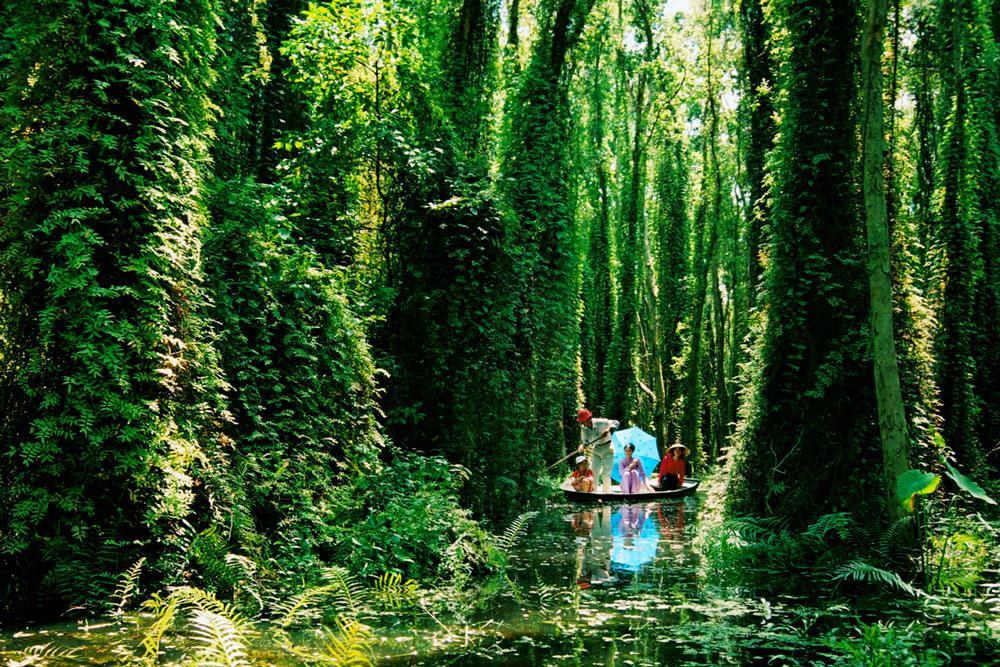 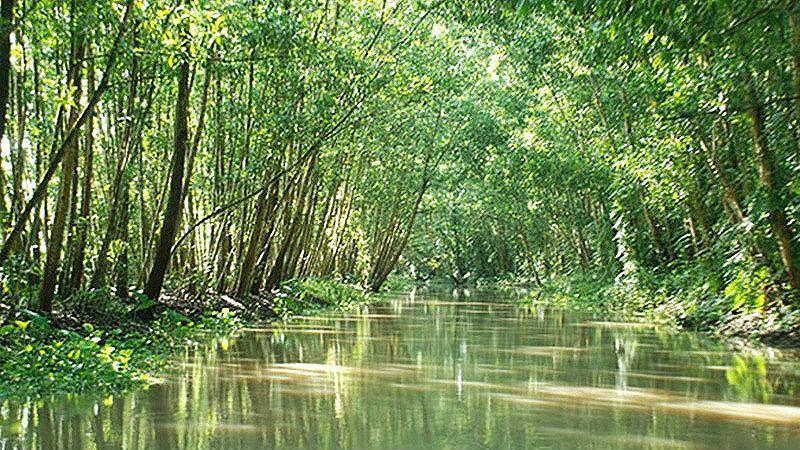 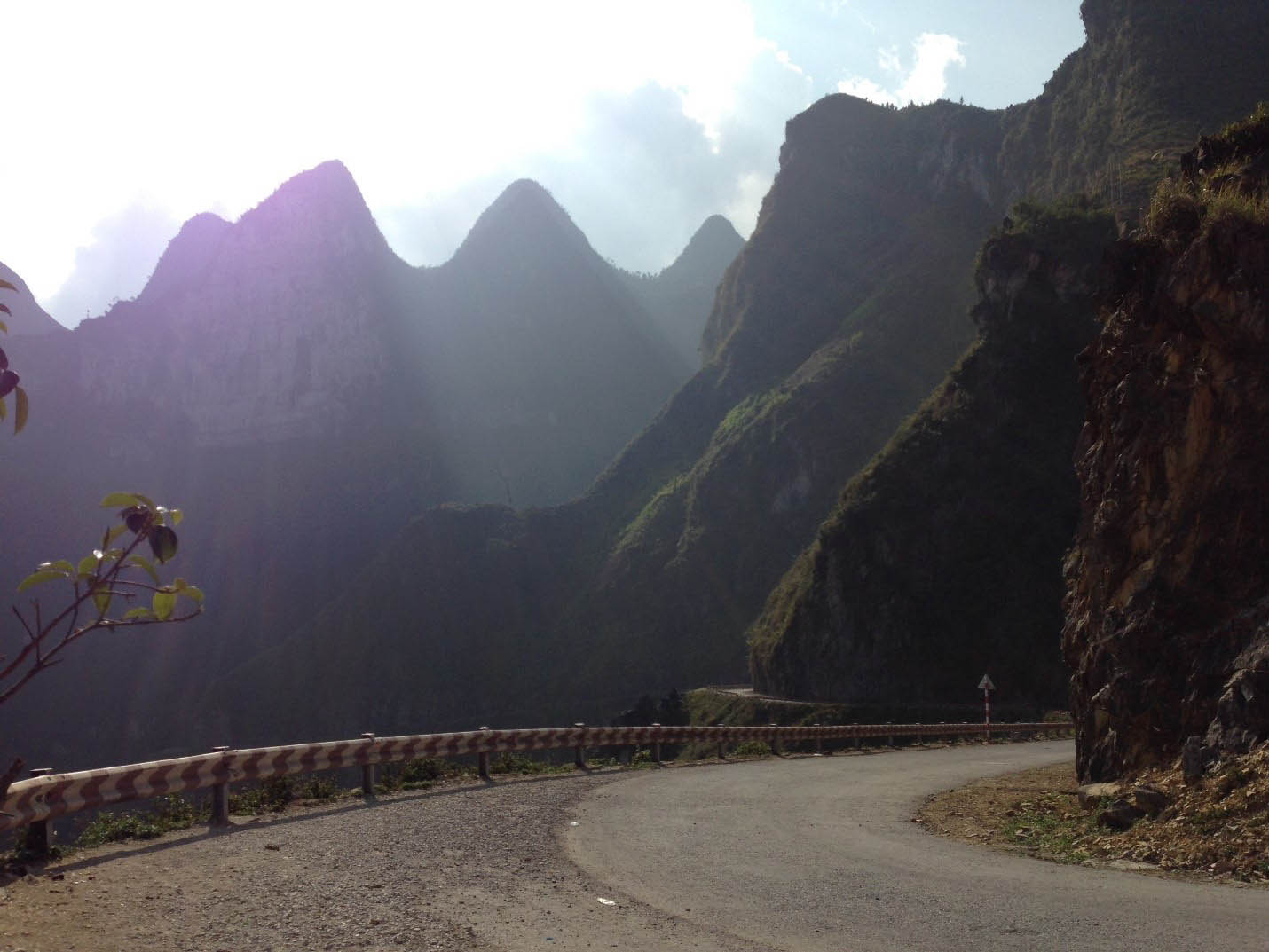 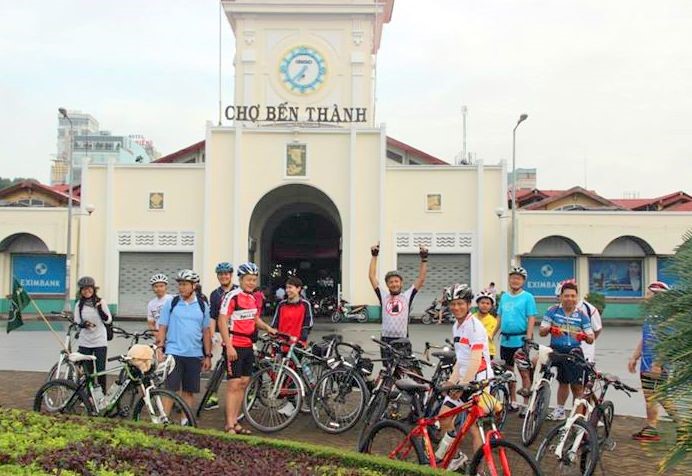 Taking Memorable Vietnam Cycling Tours from Both Domain of Vietnam? 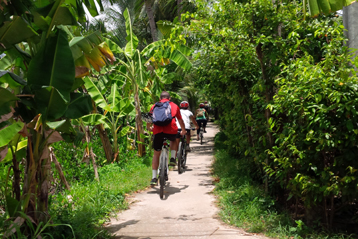 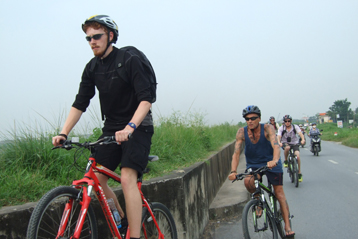 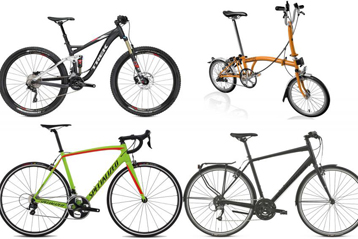 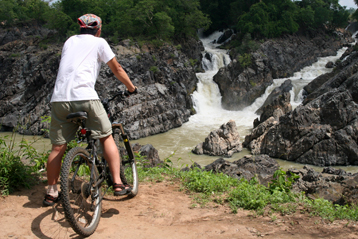